The Civil War accelerated change, bringing in more mechanization on the farm and additional industries in the cities and towns.

After President Abraham Lincoln called for troops, the Northern states had to supply 75,000 soldiers with uniforms, rucksacks, and shoes. Shoe production in Rochester tripled between 1860 and 1865. For business people, the war was an opportunity to adopt new technologies and make profits at the same time.

After the Civil War, Northern states enjoyed a time of greater wealth and leisure: people could focus on entertainment and recreation, reform movements and social causes, socialization, and culture. They took carriage rides and drove for enjoyment, and sports such as croquet, base ball (the way it was spelled in the 1800s), and riding bicycles became common. Community members attended traveling circuses, lecture circuits, plays, and musical concerts in structures such as Davis Hall, built in 1884.

Americans also became fascinated with exotic architecture. They began building Italianate homes with elaborate towers and cupolas, like the Hamilton House, which contrasts the mostly Greek Revival style of the rest of the Historic Village. One of the few American contributions to architecture during this period was the octagonal house. Orson Squire Fowler and other proponents said these homes were healthier than traditional rectangular houses because they had more sunlight and better ventilation. Soon, these buildings dotted the landscape from New England to Wisconsin and even parts of Canada. New York State has more surviving octagonal buildings than any other region.

Outside the home, gardens became more ornamental and less about sustenance. Gazebos and arbors were built for outdoor dining and tea parties or to provide shelter in inclement weather. The study of botany became a fashionable pastime, and taking in the air and communing with nature were considered essential to health. Basic vegetable gardens were hidden behind fences and hedges, where they could not spoil the beauty of the pleasure garden, created for the new leisure class.

In 19th-century New York, “opera house” was a catch-all description for a combined music hall, community center, and often a general store. Buildings like Davis Hall provided a cultural hub for a community, offering a broad range of entertainment from concerts and plays to circuses. The majority of those constructed were built between about 1860 and 1920, peaking in Western New York during the 1880s.

The first floor of the building was used as a drug store by the builder Frank E. Davis and later served as a grocery store for the community. Upstairs was an elegant performance hall where musicians, lecturers, and the occasional bear could be seen. Here, traveling entertainers belted out popular tunes and performed melodramas and comedies with mixed dialogue and songs. 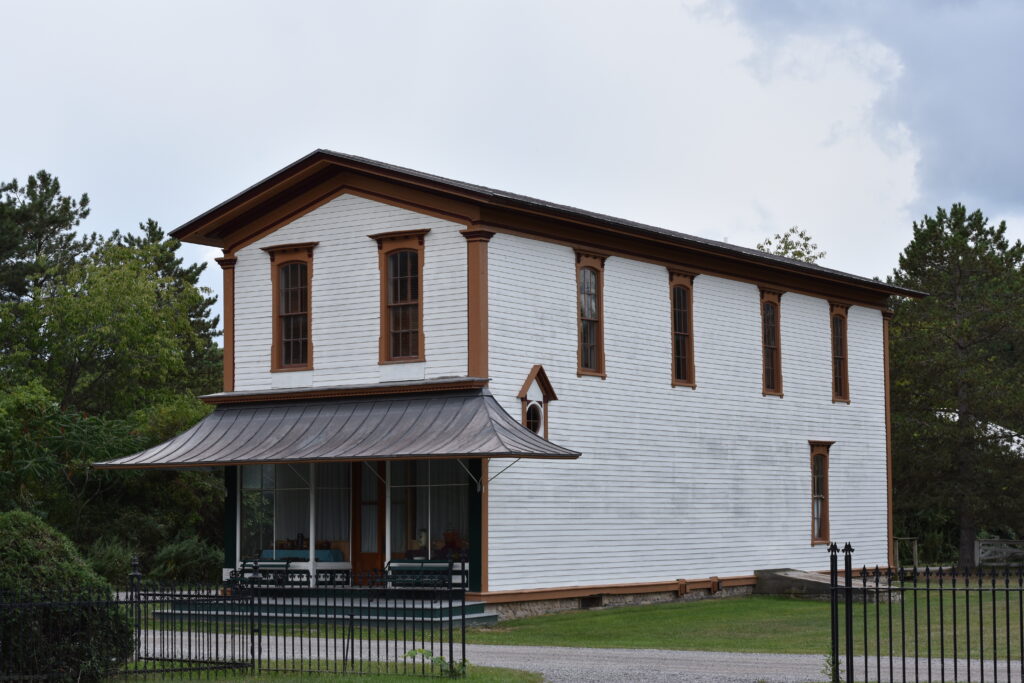 John Hamilton arrived in the Southern Tier town of Campbell, NY, in 1843 as a shoemaker. But by 1870, Hamilton was the owner of tanneries, a leading figure in his community, and proud possessor of a grand new house.

Hamilton’s towering mansion displays the full flowering of the Victorian Italianate style. The L-shaped structure has a flat, pitched roof and eaves projecting outward on console-like brackets, possessing tall chimneys with corbelled brick molding. The verandas and bay windows all fit the Italianate formula and the all-important tower, its base embracing the paired entrance doors and its middle stories containing stairway access to the upper level, is appropriately crowned with a mansard roof.

From its dressed-stone foundation walls to the iron cresting upon the tower, Hamilton’s house is every inch a fulfillment of the dictum of the influential Victorian architect, Samuel Sloan, that a man’s dwelling was not only an index of his wealth, but also of his character.

An early photograph of the Hamilton House made it possible to reproduce the landscape in the front of the residence, with minor adjustments for the difference in setback from the road. The iron fence came with the house, having been dismantled some years ago and stored in its basement. 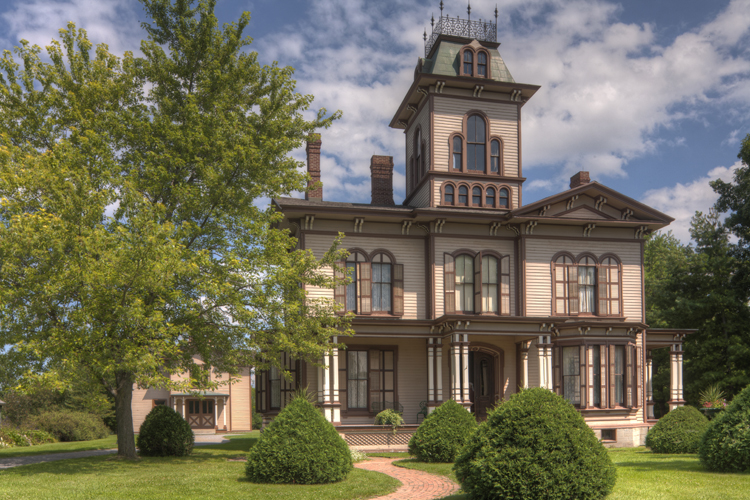 In 1848, Orson Squire Fowler, a native of the Genesee Country village of Cohocton, published A Home for All, or a New, Cheap, Convenient, and Superior Mode of Building, in which he announced that the octagon house, with its eight sides, enclosed more space than a square one with equal wall space.

The octagonal form had been used in public buildings in the past, but now as a concept for domestic architecture, it had a dedicated and convincing champion. Fowler’s books, stressing the functional and stylistic advantages of the octagon house, found many readers and several hundred followers who sprinkled the landscape from New England to Wisconsin with eight-sided houses, barns, churches, schoolhouses, carriage houses, garden houses, smokehouses, and privies.

When Erastus Hyde returned to Friendship, NY, from the Civil War, he briefly resumed farming and acquired an interest in a shingle mill. Along with his wife Julia, he moved into the new octagonal house. He and his wife shortly joined a spiritualist group.

Hyde later became a homeopathic physician. Julia Hyde was an accomplished musician and music teacher. Today, you can see a violin in the parlor that was recently donated to the museum that belonged to either Erastus or Julia Hyde. In 1978, the Museum acquired the vacant and long-neglected Hyde House from Friendship, Allegany County, NY. 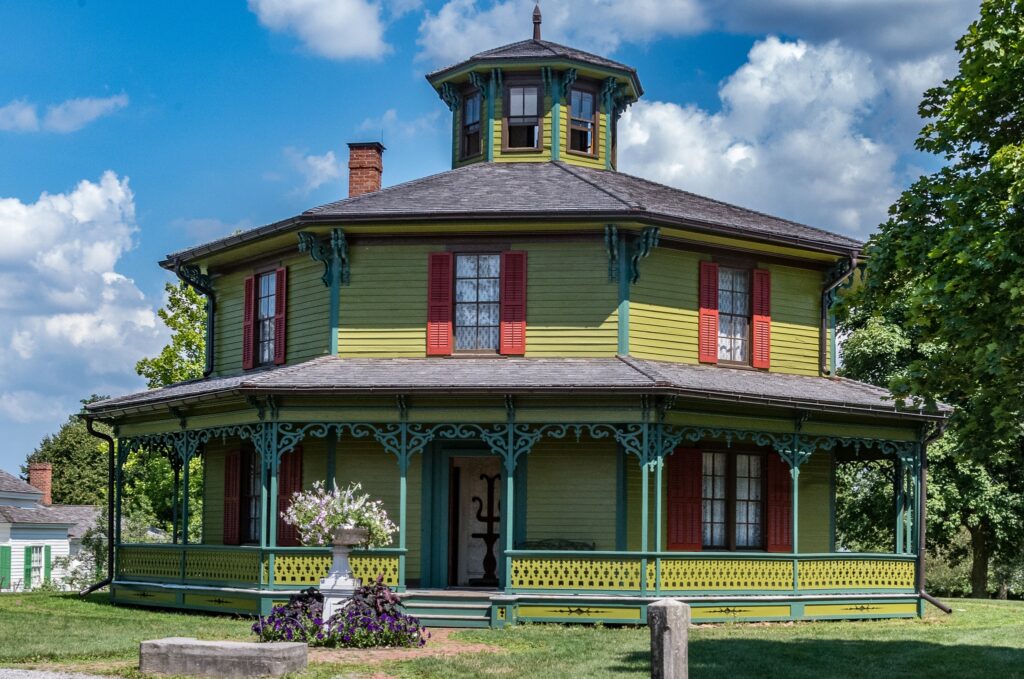